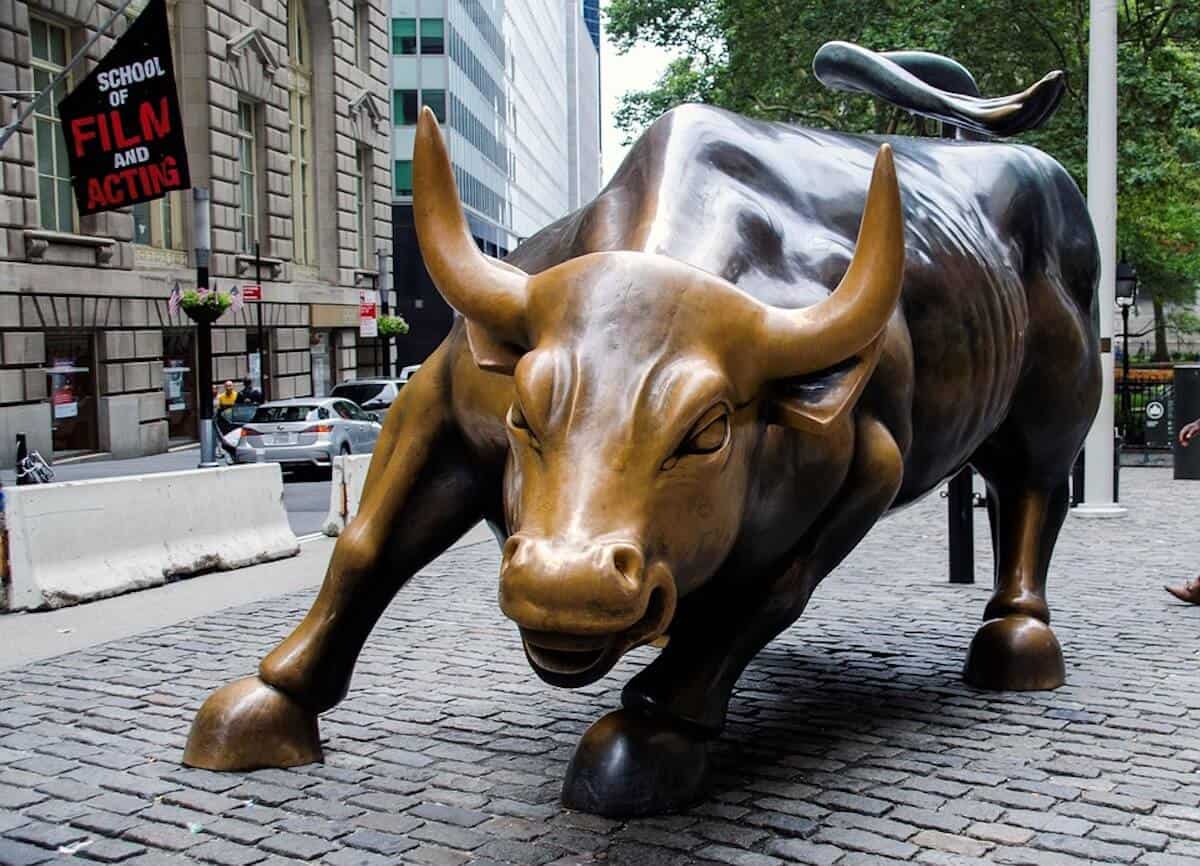 The financial and investing world has some pretty crazy true stories, especially about people who worked on Wall Street or became enamored with money.

And these real life stories and financial situations naturally attracted many screenwriters and film directors over the years.

However, these entertaining movies about Wall Street also provide plenty of insights and learnings about the investment industry.

So whether you are an inspiring investor, interested in finances, or looking to just be entertained, there are some great movies about Wall Street that you should watch.

Note: These movies include fictional characters, some based on true events, and others are documentaries. There is also no particular order to these stock market movies.

Many of these finance movies about the stock market you can potentially find on Netflix or Hulu. However, because many of those change and swap out, I won’t attempt to include which movie is on where.

I did include the IMDB profile so you can learn more and read reviews as well as an option to buy or rent the movie via Amazon.

One of the first movies about Wall Street you’ll want to check out is The Big Short, which stars Christian Bale, Steve Carrell, Brad Pitt and Ryan Gosling. It won an Oscar and was nominated for a ton of awards.

This movie has some fairly complicated financial information, but the movie breaks down the sometimes confusing processes or definitions in a humorous way.

Not only do you learn more about finances, but how some savvy Wall Street investors uncovered many issues in the market before it happened. But no one would really believe them at the time.

Naturally, The Wolf of Wall Street starring Leonardo DiCaprio was a given to be one of the best movies about Wall Street. And It’s also one of my personal favorites as well.

This film follows the true story of Jordan Belfort, who started as a small-time stock broker and rose the ranks to becoming one of the wealthiest Wall Street guys in a few years.

Naturally, he did not get to that level in the legal way and his investment firm was taken down by the federal government.

While the movie is embellished for entertainment, many parts of the movie are based on Jordan Belfort’s autobiography that he wrote. Besides the entertainment, it serves as an insight to the craziness of Wall Street in the 90s and as a warning about greed.

The movie directed by Martin Scorsese was nominated for five Oscars and other numerous awards.

Not all the movies about Wall Street are exactly true, but many are inspired by what happens in the financial markets.

Another great movie you’ll want to watch is Boiler Room, which stars Vin Diesel, Ben Affleck, Giovanni Ribisi, and others.

The story follows a college dropout who gets a job as a stock broker for an investment firm. It’s all about money and getting to the top, no matter what it takes. You’ll learn about a common investing style called “Pump & Dump,” which is still actively happening on the stock market today.

Boiler Room came out in 2000 and was one of those movies that sort of flew under the radar at the time. But now, it’s a classic movie about Wall Street that most people really enjoy.

Although financial movies with suspense and true stories are common, sometimes you need a good comedy to lighten up the seriousness of finances.

That’s where the 1983 movie Trading Places is a nice addition and change to some of the other films on this list.

Directed by Jon Landis and starring Eddie Murphy and Dan Aykroyd, the comedy follows the story of an investor and a con artist who have their lives reversed as part of a bet.

In the movie, two wealthy individuals that own a brokerage firm go back and forth about whether it’s a person’s environment or what they inherited in their genes that determines how well they will do in life. So they have a little plan in place to test this theory.

I always had mixed feelings about American Psycho, but the older I got and the more times I saw it — I started to really appreciate this movie more.

The film follows a wealthy New York City investment banking executive, Patrick Bateman and his psychopathic alter ego. He’s rich, has a great job on Wall Street, but has a secret and thirst for violence and wild fantasies.

It’s dark, yet a bit humorous at times and dives into the psyche of someone who has a predatory mindset.

While this is fictional, it’s an interesting look at the wealthy New York City elite and a character study of someone on the brink of insanity.

Well, naturally a list of the best stock market movies would have to include the classic called Wall Street. The movie directed by Oliver Stone stars Michael Douglas and Charlie Sheen.

The film takes place on Wall Street in the 1980s, following an ambitious stockbroker who wants to rise to the top as fast as he can.

He admires the now infamous movie character, Gordon Gekko, who becomes a mentor to the young stockbroker and provides him with insider trading.

Greed is the name of the game in this non-fiction film, which won an Oscar and was nominated for a few other awards.

After twenty-years had passed, the original Wall Street movie got a sequel in 2010.

Oliver Stone returned to direct Michael Douglas as Gordon Gekko again, but this time Shia LaBeouf and Carey Mulligan also star in this one.

In this sequel, Gordon Gekko is free from prison and is working towards redemption — at first.

But he then works with his future son-in-law (LaBeouf), who is a stock broker, to rebuild his fortune and take down an enemy on Wall Street.

One movie that’s not necessarily about Wall Street, but still focuses on stock trading is called Rogue Trader.

The movie came out in 1999 and stars Ewan McGregar as Nick Leeson, an investment broker who bankrupted one of the oldest and most important banks in Britain.

And yes, this is a true story which makes the movie even more fascinating. The story follows Leeson’s “rogue trading” and how he ended up making fraudulent and unauthorized trading moves.

From what he did, it led directly to the 1995 collapse of Barings Bank, the United Kingdom’s oldest merchant bank, for which he was sentenced to prison. This movie really dives into the stock trader mindset and how things can go horribly wrong.

Personally, I think Margin Call is a fairly underrated movie that did not get a ton of attention when it debuted in 2011 from general audiences.

But since, I think it has become more of a classic in the list of best movies about Wall Street.

The cast is great and features some recognizable names like Jeremy Irons, Kevin Spacey, Demi Moore, Stanley Tucci, and others.

This movie is also related to the 2008 financial crisis, like The Big Short listed above. However, this plot follows some people at an investment bank on Wall Street, over a 24-hour period about the meltdown that is about to happen to their bank.

While the movie is not based on any firm in particular, the insights from the director/writer are based on what he learned in his own real estate dealings before the crash.

The above are some of the best movies about Wall Street, many which are true stories or based on events that happened with fictional characters.

However, there are also many great documentaries about Wall Street and the stock market as well.

While documentaries are sometimes not as entertaining as general movies, these are quite intriguing and can teach you plenty about finances.

Here are a few stock market documentaries to check out.

As you noticed on this list, there are a few movies about the 2008 financial crisis. But it was such a crazy time and it’s still fresh in people’s minds as many worry that it will happen again.

After that time, there have been a few documentaries and examinations into what happened.

Inside Job, directed by Charles Ferguson and narrated by Matt Damon, takes a close look at what caused the meltdown in 2008 with interviews from people in the industry. This film won an Oscar and was nominated for numerous awards.

You’ll learn how shady some of the big players were, the greed, and how this whole financial crisis was actually avoidable but nothing was done. Fascinating stuff, highly recommend it.

Whether you love him or hate him, you can’t deny that filmmaker Michael Moore has a creative mind and some really solid documentaries.

He stands by his beliefs and his up for challenges that many are not. I enjoyed many of his other films like Bowling for Columbine, so Capitalism: A Love Story was one I had to see.

In the film, you’ll follow Michael Moore as he examines and criticizes capitalism, Wall Street, and the obsession of it in the United States. There are times you’ll find things funny, but there are moments that will anger you too.

Moore interviews ordinary people and their struggles, then marches to Washington D.C. to confront and find answers of what is actually going on with capitalism in this country.

If you have read anything related to the stock market or finances, you probably have come across the notorious name, Bernie Madoff.

He is a former investment advisor and non-executive chairman of the NASDAQ, who is currently serving a 150 year federal prison sentence for his massive Ponzi scheme. And he has supposedly scammed billions from investors.

The documentary Chasing Madoff dives into how an investigator spent years trying to expose him and his scheme. Plus, the film includes numerous interviews with people who were trying to take him down and those who were scammed.

Similar to the infamous name of Bernie Madoff, the former energy company Enron has also become a well-known name — but not for good reasons.

At the end of 2001, it was revealed that Enron reported top financial conditions, but it was false and there was an orchestrated plan to commit accounting fraud and inflate stock prices. Quickly, Enron went from the seventh largest US company to bankruptcy in less than a year!

This documentary directed by Alex Gibney follows the company’s rise and fall, plus the fallout from the executive leaders to the thousands of employees.

There are quite a few movies about Wall Street and many are well done, that it’s hard to pick the best ones. And everyone has a different opinion to which movies about the stock market and finances are the best.

Below are my top five stock market movies, which you may agree or disagree with.

What is your favorite movie about Wall Street? Are there any stock market movies you think that should be added to this list? Let me know in the comments below!