The below student loan story was written by Andrew Rombach. More about him at the end of this post. 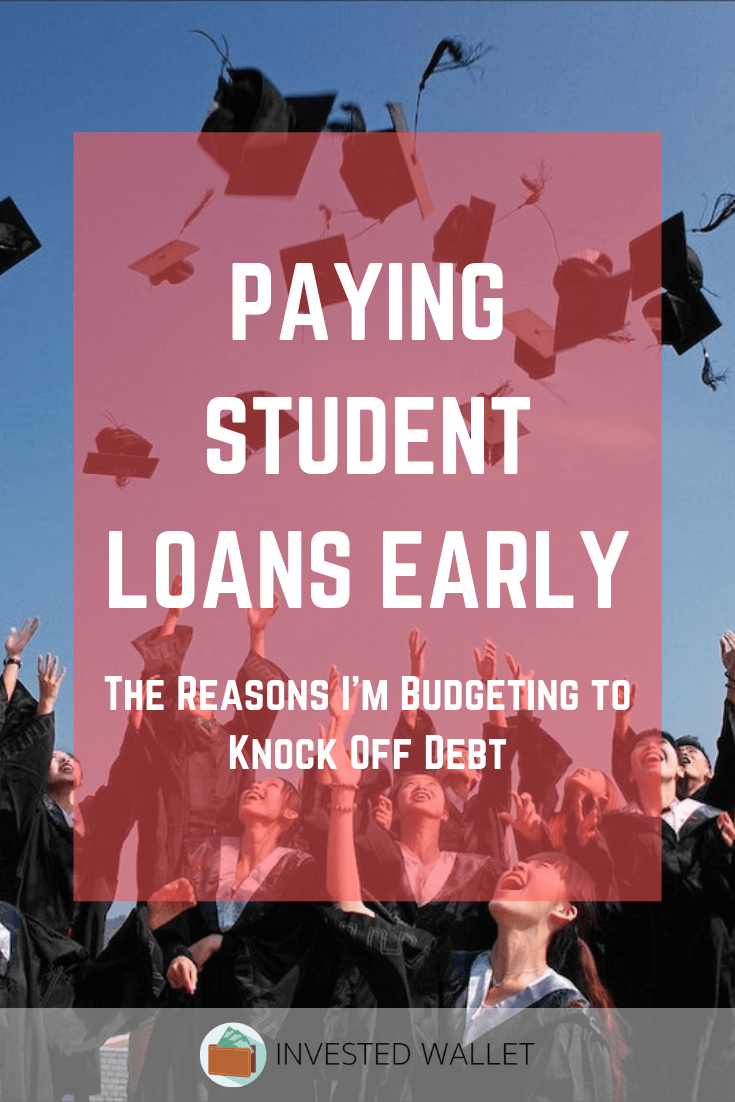 Like most people my age, I went to college to pursue a degree that might come in handy for finding a better-paying job.

After graduation, I had nearly $28k in student loan debt to my name – which is close to average depending on the source.

I was lucky because I only took out seven federal student loans to pay for my education which offer more benefits than private loans.

For example, the interest rates on my loans didn’t exceed 7%; they all varied between 4% and 6.5% which was also lucky in hindsight.

When I graduated, I didn’t think I was all that lucky. All I knew was that $28k was more money than I ever had up to that point in my life.

It was daunting to say the least, but I resolved to gear up for repayment and start working hard towards eliminating those loans as quickly as possible.

I could have followed the standard repayment schedule, but I wanted to do more. Here’s why.

Why I’m Paying Student Loans Off Sooner Rather Than Later

Some of my friends were excited that their monthly loan payments were lower than they expected; however, these payments resulted from repayment terms stretching from 15, 20, even 25+ years.

A long and drawn-out repayment did not appeal to me, even if the payments were lower. Personally, it was important that I made significant short-term progress on my loans, get the balance down, and completely pay off a few of the loans early.

Why was this such a big deal to me?

Because I wanted to make progress on what I thought was big debt at the time. Being so young, this was (and still is) the largest debt to my name.

Paying it down will be a huge milestone. I don’t want that sort of financial pressure looming over me, especially before I started taking on other debt. I wanted to get rid of the debt as fast as possible, so why not start running right out of the gate?

I planned on aggressively paying the loans down over the three or four years following graduation. I was still going to be saving for retirement, but I planned on prioritizing student loan repayment.

After making some headway, I assumed that I would have more cash for other obligations.

So in short, it was somewhat of a prideful decision, but at the same time, I wanted to have more cash for serious decisions regarding retirement, investments, etc.

How I’ve Paid Them Off So Far

It’s been nearly three years, and things have been going great! Here’s what I’ve done:

I took full advantage of the six-month grace period to find a solid job, save up as much money as I could, and figure out the most affordable living situation.

Putting payments on hold was a little stressful because I knew interest was still accruing (I had unsubsidized loans), but I figured out my living situation and found a job before starting repayment which was very fortunate.

Through my work, I received a student loan repayment benefit of $200 each month. I took advantage of every penny while making additional payments directly after each of those monthly contributions.

By timing it this way, I was able to cut into the principal of the loans more effectively instead of seeing my money wasted on interest. Oftentimes, I tried to exceed the contribution. By matching or exceeding my company’s $2,400 annual contribution, I effectively doubled my repayment efforts.

So, you know how much I was paying, but it’s important to note my repayment strategy. I combined both the debt avalanche and debt snowball methods.

I’m not sure if there’s a name for it, and “combining” may not even be the right term. At any rate, I basically switched back and forth between the two when it suited me.

I would consistently make higher payments on my high-interest debt and stick to the debt avalanche method until a loan balance dropped below $800.

Then, I would swap over to the debt snowball method and hammer down on the low-balance loan with much larger payments until it was paid. It was a great feeling paying off an individual loan despite still having thousands left in overall repayment.

I bided my time early on and got my life in order during the grace period. Afterwards, I devoted a significant part of my budget towards paying off student loans while taking advantage of help from my company.

I was strategic in how I targeted both high-interest and low-balance loans.

Furthermore, if I ever came into some cash outside of my salary, I chucked it right at my student loans about 90% of the time.

My strategy so far has been dependent on proactive repayment. I’m lucky to have a salary that is able to support that, and my employer has been generous enough to make contributions as well.

So far, I haven’t relied on any other outside help aside from the initial grace period.

I’ve been thinking about how to finally wipe this debt from my life. I could refinance my student loans. At this point, I haven’t taken advantage of any of the federal benefits offered by these loans since the grace period.

It might make sense to refinance my loans and reduce the interest rate. If I could get a lower rate, then I’d save money on my remaining loans, but more importantly, it would help me while investing my money or saving for retirement, too.

Note:If you are considering refinancing your student loans to save money then Credible is your best and most trusted option. Compare prequalified student loan refinancing rates from lenders without affecting your credit score. And it is completely free to use!

On the other hand, I could just make minimum payments with my federal loan servicing moving forward. My overpayment from the last few years has dropped the minimum payment, so I could move forward this way with very manageable payments.

This would also let me put my money towards different obligations like investing or retirement. I wouldn’t need to go through the hassle of refinancing either.

I’m curious to hear advice from any readers in the comments section. There are a lot of options at this point thanks to paying down the bulk of the loans so quickly.

Have you ever been in this situation? What do you think I should do now to tackle this final bit of student loan debt looming over me?

Author Bio: Andrew Rombach is a Content Associate for LendEDU – a website that helps consumers, small business owners, real estate owners, and more with their finances. When he’s not working, you can find Andrew hiking or hanging with his cats Colby & Tobi.