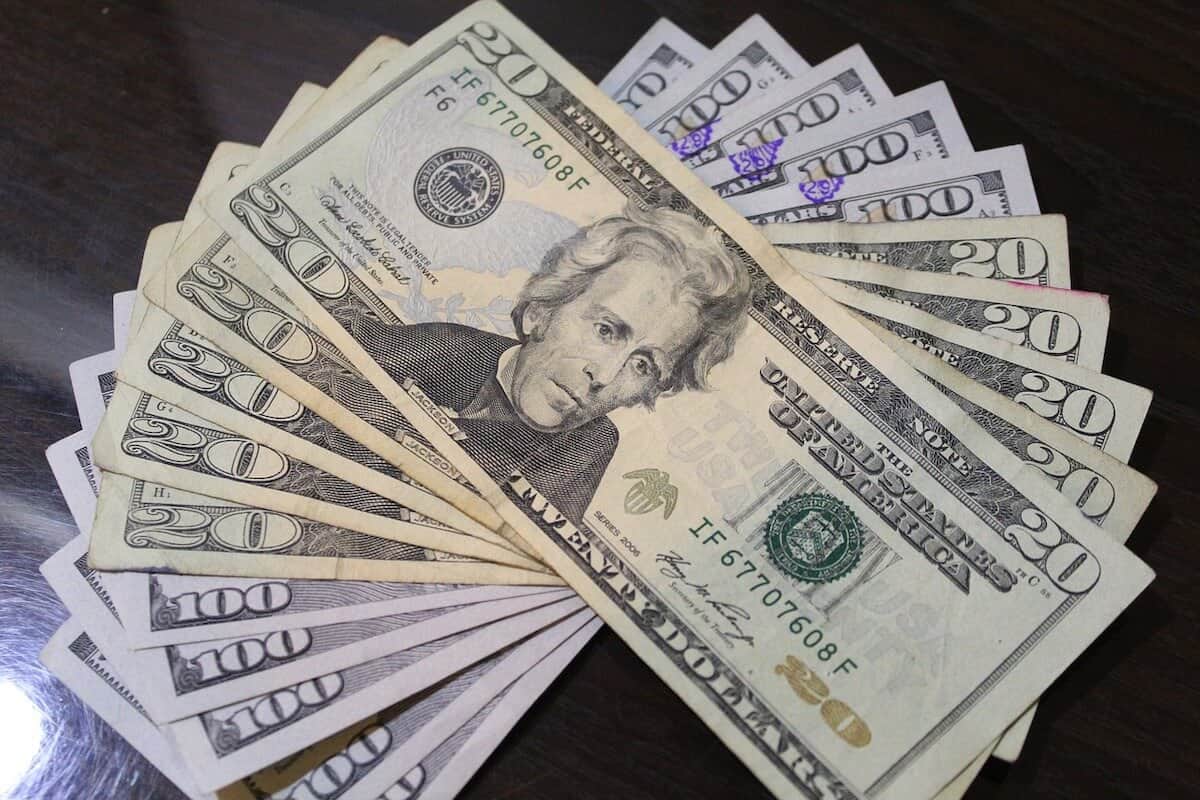 While many of us will work a 9-5 or find a common side hustle, there are also plenty of weird ways to make extra money. 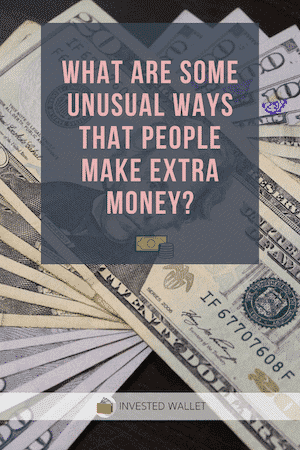 Generally, nothing surprises me these day. When I was researching to find more unusual money making ideas, I was certainly taken back a few times.

But there really is a market for almost anything where people are willing to spend their hard earned dollars.

And with the continued advancement of technology and new companies, there are a lot of creative ways to make money.

Many of these ideas might be interesting if you are looking to make some extra cash. Others, might be a bit too weird or uh, even awkward for you.

Either way, here are some weird ways to make money (and ones that many other people are doing currently).

Okay, so this is certainly a bit different from what I generally post about. However, sometimes I think it’s fun to break up the content with something a bit more entertaining.

Believe me, some of these unconventional ways to make money might not be new to you, but many will be potentially a little surprising.

Let’s dive into the weirdness!

I only came across this recently, but it’s quite popular and there have been tons of articles written about selling your plasma.

The reason it’s popular is that it doesn’t take much time, you end up helping people, and you can make some money.

But what the heck is plasma?

It’s the clear portion of your blood that contains water, salts, enzymes, antibodies and proteins. Your body produces it to  form blood clots, fight diseases and more.

If you choose to sell your plasma, doctors use it to treat immune-system deficiencies, severe burns, and a variety of diseases.

There are some limitations to how often you can donate and payment depends on a few factors. But if this stuff doesn’t make you squeamish, you can even make some cash doing this. More info here.

Rent Yourself Out As A Friend

Yes, people get paid to be friends with others. Pretty sure that’s like an old joke, like “How much are your parents paying your friends to hang out with you?”

Anyway, yes people actually rent themselves out to hangout with others for events and other activities.

There are websites to do this or I’m sure you could go into Craigslist to find some people looking to pay for your friendship.

A bit weird and probably something to be a bit cautious about, but there are people making money and charging by the hour.

Seriously though, The Penny Hoarder explored this unusual money making side hustle.

Yup, you read that correctly. Yes there are women selling used panties and there are many people buying. You probably made a face and then thought, “Well, there are some creepy people out there too.”

And that is a fair point but there is a large market for used underwear.

I’m not going to get into all the details, but there are legit websites to sell used panties and women who are making hundreds a month doing so. I kid you not!

If you want to read more about this, check out this article about selling used panties.

In the last few years, the news covered Bitcoin constantly. Everyone was talking about investing in the digital currency and interest skyrocketed.

This drove the price from hundreds to almost $20,000 in a span of a few months. Since then, the prices have fluctuated and many more coins popped up, you can see the prices here.

It’s also easy for anyone to open an account on a cryptocurrency exchange like Coinbase and link your bank account. This is where you can purchase and store any cryptocurrencies in your digital wallet.

But another way some people earn money is through Bitcoin mining. It’s a little complicated so I’ll keep it simple here. If you want a more in-depth breakdown, Investopedia does a good job explaining the process.

Mining involves purchasing and building computing equipment to confirm transactions in the blockchain. By doing this, you can generate more Bitcoins for free.

This does require technical skills to accomplish this correctly and requires some strong computing power, high electricity and internet bandwidth.

Wait in Line for People

If you are like me, you probably hate waiting in long lines for whatever it may be. You could be standing for hours and even outside in all sorts of weather conditions.

But you can actually hire people as your professional line sitter, where you pay them money to wait in line for you.

So if you are someone who doesn’t mind waiting in lines, it might be a great way to make some cash.

You can find this work through your own business (yes, people have made entire businesses out of this), Craigslist, or apps like TaskRabbit.

Seriously, this guy made over $1,000 standing in line for people who wanted the new iPhones at the time via TaskRabbit.

Who doesn’t love to eat food, right? And you’ve seen some of those televised eating competitions too, like the hotdog eating contests.

But if you love food and have the stomach to handle fast eating, people can make some decent cash.

There are also some local ones you can enter or even at festivals. However, these probably do not pay out insanely high.

But if you are looking for some bigger eating events, you can find them on the Major League Eating website where prizes can be in the thousands.

Some of the more well-known eaters make a decent living. For example, Joey Chestnut has won 12 Nathan’s Hotdog Eating contests, has multiple world records, and has made close to $600,000 from eating.

Of course, that’s not the norm but some of the professionals are making a decent living from eating.

We all know drones have become super popular in recent years, so not too weird of an idea to make money.

But beyond traditional drone footage needs like real estate, weddings, events, etc. there are some unique ways to make really good income with drones.

There are people making good money as operators of drones in areas that would be considered “dangerous jobs” if a person were to do it.

This of course requires you to own a drone, have any licenses and FAA exemptions, and be really good at flying a drone.

So let’s look at occupations and activities that can have a dangerous human element to it:

According to a person on Quora who does this, you can expect to earn anywhere from $15,000 to $50,000 per day! Insane. Certainly one of the more creative ways to make money beyond traditional drone needs.

Wait, so people are getting paid to cuddle with others? People are looking to hire people to feel snug and some human touch?

Apparently so because their people are getting paid by the hour to do just that.

There is nothing sexual allowed, this is strictly for cuddles and a human connection. Things like holding hands, snuggling, etc. Interesting, I guess?

But it’s become an actual business for an Portland based cuddler who started a website Cuddle Up to Me a few years ago.

They sell various self-care kits, you can book a session with a professional cuddler, or apply to be one. Certainly a weird way to make money, but hey if there is a market then more power to these people!

Okay, so those were some weird ways people are making money. But besides that, I found some surprising ways people have or are raking in cash online.

Two are honestly simple and cool ideas, that were creative enough to work. Obviously, you could try to replicate them but probably won’t work like these originals.

But hey, it might trigger your own creativity. After all, there are plenty of ways to make money online!

Framing Tweets And Selling Them

Yes, you read that right! You can buy Tweets that are framed to hang wherever you like!

Zach Katz started Framed Tweets in 2017 and he states on the site, “My mission is to bring the internet’s best tweets to life, for all to enjoy.”

I mean, it’s not surprising to consider what some things pass as art these days. But I thought the framing tweets idea was pretty genius.

Technically, it’s not that complicated to do, but he was the first to make it mainstream and now reaps the benefits of that.

It’s simple, but with tons of well-known people, celebrities, athletes, and musicians saying random, funny, or iconic things — it’s a great way for people to have a talking piece in their home.

And as simple as it is, they do look pretty great. Oh and Zach is pulling in some big monthly numbers of this idea.

I never heard about this story before, but when diving into the weird ways to make money this popped up a few times.

You might have heard about this website making $1 Million dollars from just general ad space, but if not, I’ll give you the goods below.

Why? The goal was to sell each pixel for a $1 in advertising space, thus generating the creator a million dollars.

He then promised any ad customers that the site would remain online for at least five years. And did it work? Yup! The marketing play went viral back then.

After a year, he had some final spots left so he auctioned them off with the final tally of $1,037,100. The website is still active today and still gets traffic, even after all these years.

Also Alex became the founder of the app called Calm, which has raised 140 million since it was started in 2012. Needless to say, he’s a very smart guy.

This way to make money online is probably not too weird when you think about it. This is something I actually did for a good year in my spare time not long after I graduated college in 2010.

But at the time, it was definitely an unconventional way to make money, but I enjoyed the additional income.

I had created an account on Crowdspring back in college, to practice my graphic design skills.

Basically, people would have projects they needed designed, they’d rate and leave feedback, and at the end of a period of time would choose one.

The person chosen would get paid whatever the set amount was for the project. You could find ranges from $200 up to a few grand. Not bad!

However, they started adding writing, domain naming, and product naming projects. And decided to give it a shot. Within nine months I made over $8,000! One naming project alone had netted me $2,000.

Now winning is not easy as you are up against hundreds of people and it can take time to think of good company names or domain names that are available. But a cool way to make some cash!

There you have it, some of the weirdest ways people make money. Some aren’t too weird, more creative than anything. But as you can see, there are so many ways to earn additional income.

Have you made money in any weird way? Do any of the above interest you? Let me know in the comments below!